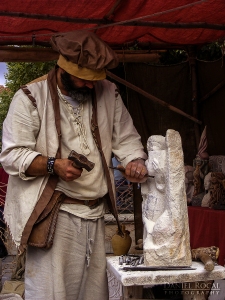 I HAVE ALWAYS found the Journalism 101 guide–who, what, why, where, when, and how–to be of limited help. It’s a bit like telling an Olympic track hopeful that all they need to do to win a gold medal is run faster than everyone else. Yes, but… Which whats? What whens? Whose wheres? How many hows?

Sometimes when I am stuck in front of a blank screen and wondering where to start, I remember the story of the boy and the sculptor. The kid came across a man chiselling away at a large block of stone, from which the form of a mighty lion was emerging.

Awed, the boy asked, “Sir, that’s amazing. How do you sculpt a lion?”

“It’s pretty simple,” the man replied. “You just chip away all the parts that are not a lion.”

That might come in handy next time you don’t know where to begin writing, or are having to whittle down what you have written to fit your word count. How do you compose an article from all your diligent research? Counter-intuitively, it’s pretty simple; just ignore all the stuff that isn’t part of the article.

We find this approach in the Gospels. The writers left out different material in line with the needs of their different intended audiences. John even noted toward the end of his account (21:25): “Now there are also many other things that Jesus did. Were every one of them to be written, I suppose that the world itself could not contain the books that would be written.”

With that in mind, what are some ways to go about becoming a tighter writer? Here are some suggestions on how to know what to let go:

Repetition. Sometimes, we like to quote several different people in an article because we think it subtly says to the reader that we have been thorough in our research. When space is at a premium, limit comments to the people that really have something good to say, but make it clear that you have spoken to others. “Among the critics of the decision is Fred Smith, who said…” flags that, as might “Fred Smith summed up the feelings of many in saying…”

Redundancy. This is not just another way of saying repetition. Knowing your audience’s level of awareness may allow you to cut out or cut back on some of those filler and qualifier words, titles, and contextual explanations that either take up space or become distracting rabbit trails. If you are writing for a denominational magazine, you can probably assume at least some level of understanding of its church governance, for instance, that means you don’t need to go into a lot of background detail.

Reaction. “Fair and balanced” was the journalists’ credo long before it got co-opted by a cable news network, but what that looks like might be different in our digital age. Back in the day, it meant giving “the other side” some good space in your article. Now, an online article may not need to include details of the opposing view, as long as you make it clear that there is one, and offer a link to a separate article that goes into it all.

Reason. Without getting down into the details of what are the WWWWWHs, clarifying the core of what you want readers to know can help identify what is extraneous. Remember that Luke wrote his Gospel for Theophilus, that he “may have certainty concerning the things you have been taught.” Shorter news pieces are fairly self-regulating, of course, but longer-form articles can be tricky. Too much “color” doesn’t bring them to life, it dazzles readers so they don’t really know what they are looking at. Does that nice little anecdote really breathe life into your piece or choke it?

Having eliminated all that is superfluous, you still need to corral and order what is left, but now it’s a lot more manageable. You’ve clarified what the WWWWWHs are by determining what they aren’t. You know the puzzle you are putting together doesn’t have any additional pieces that confuse the final picture.

Originally published in the Fall 2019 edition of the Evangelical Press Association’s Liaison as “The Art of Omission.”