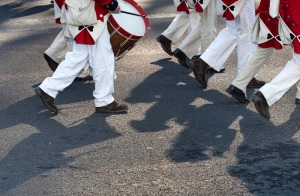 LIKE SOME OF my favorite radio stations, since Thanksgiving I have been in “all-Christmas-music-all-the-time” mode. This annual custom has revealed two things: Not everyone agrees that you can’t have too much of a good thing (ask my wife), and some of the most popular songs of the season actually have very little to do with what it’s really all about.

I’m not talking about the obvious candidates for dismissal, like I Want A Hippopotamus for Christmas (not a favorite in the World Wildlife Fund offices, I suspect), or Grandma Got Run Over by a Reindeer (presumably boycotted by People for the Ethical Treatment of Animals).

I’m referring to classics old and newer, like John Lennon’s Happy Xmas, War is Over. Actually, it's just begun.

Think I am exaggerating? Consider that news of Jesus’ birth prompted a bloodletting, as Herod sought to cancel a threat to his dictatorship by ordering a mass killing of baby boys. And this was just in the physical world.

Bethlehem was a beachhead, not an armistice. The lullaby before the storm. The events that unfolded in the stable (or the cave, or whatever it was) were an invasion of occupied territory. The first baby steps in the great liberation of humankind.

God was announcing the final campaign in the war on all that is wrong with our world. But peace can cost. It can demand action, not just wishful thinking and warm cocoa. Remember that Jesus came wielding a sword (Matthew 10:34), not waving a magic wand.

With that in mind, I wonder whether the heavenly choir that burst forth announcing the incarnation to the shepherds in the fields was maybe accompanied by a faint military beat.

It’s all too appropriate that the color we most associate with Christmas is crimson red, the color of blood. But we tend to shy away from this thread of the holiday, preferring the white snow that conveniently covers the ugliness around us. Or, the utter fantasy of a newborn baby not crying.

However, I suspect that if we had been there and could have deciphered baby Jesus’ first sounds, they would have announced: “It is started!”

One of my favorite Christmas songs is Little Drummer Boy, never better interpreted than by Jars of Clay. One of the reasons I like it is that beneath the sweet sentimentality there’s a subtle depth: Don’t forget that, well into the nineteenth century, little drummer boys walked into battle unarmed, marking time for the soldiers.

Maybe Jesus smiles during the song when the boy offers his “pa rum pum pum pum” because He recognizes the beat, pointing him to Calvary.

Yes, the angels declared “peace on earth,” but they better than anyone knew the price that would yet have to be paid. After all, while the D-Day landings in June 1944 effectively marked the demise of the Nazi war machine, almost a year and many more lives passed before Germany’s final defeat.

Much as I like to sing, “All is calm, all is bright,” in some ways the song offering those words might better be called Violent Night, Holy Night. Christ the Savior is born, battle is begun.