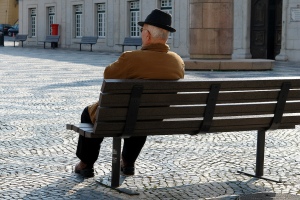 IN RECENT TIMES, an old man has been teaching me about prayer. About the forgotten hope and doubt that so often surrounds it. And, how there are times when the answer to our prayers can involve stretching us in ways that may leave us speechless.

His name is Zechariah; you’ve probably met him in the Gospel of Luke. In the first chapter (verses 5-25) we read how the aging priest is visited by the angel Gabriel while he is serving in the temple, having been chosen for duty in a lottery. Gabriel declares that Zechariah and his wife will welcome as their son the way-maker for Jesus, John the Baptist.

The encounter and ensuing events leave me with some questions about my prayers.

Have I given up? Though Zechariah is told that his prayer has been heard (v. 13), it must have been some time since he last offered it up, because he now questions whether it can be fulfilled. After all, he and his wife, Elizabeth, are both advanced in years. Maybe there are prayers of mine I think have fallen on deaf ears, yet they have similarly been heard: I just don’t know it yet. That thought helps buoy my faith for seemingly unanswered requests, as I carry the weight of the wait.

How “impossible” are my prayers? Zechariah had prayed in his younger years when he and Elizabeth were unable to conceive for some unknown reason. Clearly, he believed that God could do something then. However, was that only because it was still a reasonable outcome for a young couple to conceive? Did he think that God could do the “possible” impossible then, but not the “impossible” now? Now that it’s beyond the bounds of “normal” possibility, he can’t believe for that? Likewise, do I restrict my prayers to what I think is reasonable—to what I think God can “manage?”

Am I willing to risk to see my prayers answered? Without rummaging around too much in their private life together, Zechariah acknowledges that conception seems unlikely. Not only because Elizabeth is beyond child-bearing years, but because he is “an old man,” too (v. 18). If it takes two to tango, he seems to be saying that his dancing days are over as well. But before God can do the seeming impossible in his wife, Zechariah is clearly going to first have to take some vulnerable steps of his own, to “man up,” so to speak.

How far dare I stretch, I wonder? How much am I willing to initiate, risking all, in order to see my prayers realized​? Zechariah’s example stretches me beyond my limits. The (belated) answer to his prayer leaves him speechless, of course, when Gabriel strikes him mute for not believing things would be as he has said (v. 20). I’d prefer to be silent in amazement, rather than admonishment.