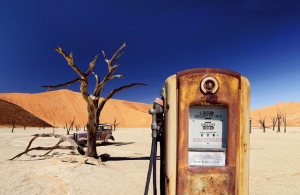 FOR ME, THERE’S a point where the appealing quiet confidence of faith becomes repellent loud certainty. Like the guy who sprang out at me between the pumps at the gas station one morning.

I was daydreaming gently as I filled my tank when he suddenly appeared, fixing me with an exaggerated smile.

“Do you know Jesus as your personal savior?”

“Okay, great!” And with that he bounced on to the person at the next pump, a sort of tract-wielding Tigger.

I could see him in my rear view mirror, as I pulled away, jumping from one customer to another. I don’t know whether everyone was claiming to be on first-name terms with the subject of the four Gospels just to get rid of the guy, blowing him off, or ignoring him, but he ricocheted from one person to another as if he were in a giant pinball machine.

And as I drove away, I did wonder what would happen if someone said, “No, actually.”

Would he have stopped long enough to take the time for a presentation of the reasonableness of faith, or slapped an evangelistic leaflet in their hand and told them to read it and take the test at the end (“If you die tonight, do you know where you will spend eternity?”)?

I don’t doubt the man’s sincerity or fervency, and I admire his desire for others to come to know Jesus. But I do question his methodology.

In response to my raised eyebrow, some might want to quote me D.L. Moody’s retort to a critic, about his preferring the evangelism he did to the evangelism they didn’t. Fair enough. It’s true that it’s too easy to make excuses for not talking about Jesus to others, using a supposed concern for effectiveness or cultural sensitivity as a shield behind which to hide our fear of being rejected, ridiculed, or worse.

But, at the same time, those of us with a slightly more reserved approach to sharing our faith aren’t being helped by the likes of the Conoco converter. For every one person who might meet Jesus at the pump as a result of the Texaco testifier, I’m pretty sure there’s a whole bunch more left thinking “Christian” means “nutjob,” so that when they meet us their guard is up.

Accepting that the usual way of doing things can be overruled is part of the package when you believe in a God that entered time and space, of course. Yes, He calls us to do apparently crazy things at times. We see that in the Bible, and I’ve experienced it in my own life, and those of good friends. But it seems to be the exception, rather than the rule. That’s partly why it can be so effective.

The fact that God may direct one of His people to do something unorthodox, or even redeem a situation when they did so without His prompting, doesn’t mean that any and every action on His behalf should get a pass. Some things are just dumb.

In the parable of the sower, the man scattering the seed did so generously, but only where he might realistically expect some results; even the hardened path was soil, remember. He didn’t throw it around on asphalt, between the pumps.