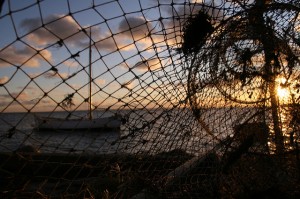 JUST WHEN I think I may have this following Jesus thing down pretty well, something comes along to remind me that I’m actually rather clueless. The latest upset, over the cost of discipleship, came during breakfast on the beach.

Actually, I was reading the John 21 account of Jesus’ post-resurrection appearance to Peter and some of the other disciples as they fished on Galilee. You’ve doubtless heard how Jesus’ thrice-repeated “Do you love Me?” to Peter helped restore the disciple after his three denials of his Lord when He was hauled before the high priest.

But this time, my mind went elsewhere—to another fishing encounter. Back when Jesus was just beginning his ministry, he borrowed Peter’s boat for a teaching platform. Then, Luke 5 recounts, he told Peter to put out into deep water and lower his nets, even though he’d fished all night and not caught a thing.

When he and his crew pulled up a bumper catch, Peter’s response was not delight but despair: “Depart from me, for I am a sinful man, O Lord” (verse 8). Such clear evidence of God’s blessing showed him how fallen he was. Though I know—theoretically—it is all about grace, if I am honest I can tend to think of good things that come my way as a reward for good behavior.

And how interesting that at this height of his success as a fisherman, Peter was willing to leave it all behind and walk away to follow Jesus. My inclination would probably be, “God’s hand is on this, so let’s stay right here and mine it for all it’s worth!”

Fast-forward to John 21, where in their sorrow and confusion the disciples have gone back to what they know, fishing, and once again worked all night without success. Only when their nets are bursting again do they realize that the Person on the shore who just told them to cast on the other side is Jesus. And once again, Peter leaves it all behind, jumping overboard to rush to Jesus.

I suspect this deja vu moment prepared Peter’s heart for facing his worst moment, his betrayal of Jesus, and the three-fold restoration that followed. However, this time he wasn’t being asked to put down the bulging net of success but the empty hands of failure. Only then could he be truly free to follow Jesus.

It can be a challenge to let go of the things we have; Jesus’ encounter with the rich young ruler makes that clear. But maybe it can be easier to give up joys—because, after all, they are a tangible sign to us that He is good—than to give up heartaches that leave us with questions.