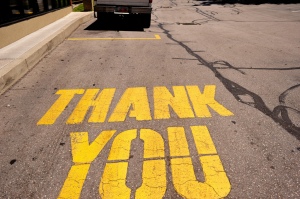 HAVING BEEN RAISED in oh-so-proper England, I learned to be polite come what may. Which is how, when living in drug-liberal Amsterdam and being accosted by dealers—as I walked with one small child in a carrier on my back and pushed another in a buggy—I’d always decline their offers with a courteous “No thank you.” I almost wanted to apologize for turning them down.

Only on moving to the United States did I start to realize that expressing appreciation could be more than a social tic. There’s nothing wrong with manners that merely oil the hinges of everyday interactions, whether that’s a nod to someone who holds a door open for you or a shake of the head to someone who wants to sell you some Moroccan Gold. But there’s more to it than that.

Thanksgiving helped me begin to see this. I quickly came to appreciate the holiday for how, separated from the glitz and gifts of Christmas, it is all about true gratitude—making the effort to get to be with people who are important to you, just to be together. And taking time to reflect on all the good things you have received and experienced.

In contrast, I realized that the thanks I had often expressed in the past hadn’t really been about the other person, at all, but had really been all about me—wanting them to think I was polite, nice, gentlemanly, or whatever.

I also was on the receiving end of some thanks that went beyond the usual social niceties. There was a note from someone thanking me for speaking to a church group on one occasion. It was brief, but the writer took time to reference something I’d said, making it clear that they’d been listening and this wasn’t just a generic “thanks for coming.”

Then there was the box that arrived at my office a week or so after I’d spoken with a well-known author about his new book. Inside was a Russian general’s hat he’d picked up somewhere on his world travels. With it was a handwritten note thanking me for the interview—only one of a raft he was doing—and referencing something we’d talked about in regard to the keepsake gift he had sent.

I have to admit that part of me wondered whether this wasn’t more to do with slick media relations than being genuine, but I got to watch the person concerned in other situations as time went by. I observed him to always be deliberate about engaging people, taking time to focus on them even if their encounter was for just a few moments. If he was a fake, it was a full-time job.

These and other experiences began to teach me that a true “thank you” is selfless and specific. It aims to make the other person feel better about themselves, not better about you. It spotlights why you are appreciative. It says to the other person, I noticed. What you did made a difference.

What sort of a different world might we find ourselves living in if we all went around with this sort of attitude? In his book, A Simple Act of Gratitude, John Kralik writes about how deciding to write a thank-you note to someone every day for a year not only impacted others but was part of a renewal in his own life.

Reading it helped make me want even more to be more intentional about cheering the good in others, rather than criticizing the bad. One day, I should really write and let him know.

6 Responses to “Lessons in true thankfulness”