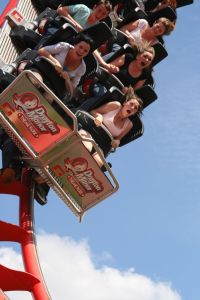 WHEN I TELL you that I have a pair of socks in my drawer that’s almost thirty years old, you’ll probably acknowledge that I’m someone who is most comfortable with the tried and trusted, the familiar. Let’s just say that change doesn’t always come easy.

So the big adventure Marcia and I are embarking on soon has brought up all sorts of feelings that don’t so much conflict as swirl together in a cocktail. If you’ve ever faced stepping out into something that you believe God is leading you in, though there are elements of crazy about it all, maybe you’ll identify.

I’m stoked. What’s ahead is the unfolding of something that began several years ago and then seemed to stall for far too long. It’s exciting (and humbling; I now feel bad for all my mumbling and grumbling along the way) to finally see answers to many prayers, some of them long forgotten.

I’m scared. While we’re confident that God is in all this, there are moments when I think to myself, But what if…? Then I have to remind myself that if we knew the end from the beginning, it wouldn’t be a step of faith. As I said once before, a real adventure has to include the possibility of failure, otherwise it’s just Disney World. There’s a difference between Splash Mountain and whitewater rafting: with the first you’ll probably get wet, while with the second you just might drown.

I’m sad. Going for the new means leaving the old. Saying hello requires some saying goodbye. You have to put some things down to be able to pick up others. For someone who hangs onto socks for more than a quarter-century, this is hard.

It’s tempting to hold on to what I know to be good rather than let go for something that promises to be equally good. but is yet unrealized. But I am reminded that if we’re too comfortable, we’re probably not stretching ourselves enough; a groove becomes a rut when it goes on too long.

In my wobblier moments, I am inspired by the memory of a visit to Fort Union in northeastern New Mexico, the last outpost on the Santa Fe Trail. Stepping away from the ruins, I looked out at the vast wilderness, stretching for miles under an endless sky.

Still visible across the terrain, more than a century later, were the ruts carved by the wagons that brought the pioneers out West, heading to the unknown and untamed. This was no roller coaster. Their rugged example makes my changes seem minor in comparison.

2 Responses to “Hanging on tight”