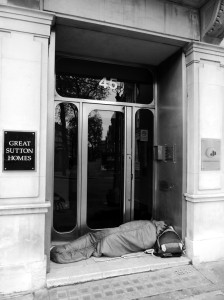 HER NAME WAS Marilyn, but she was no Monroe. Her greasy hair hung lank and her shabby clothes were matched with a pair of broken-down sneakers. She may have been a pin-up once, but she was all torn-down now.

We met in a London street as I hustled to the train station to head home after a long day of interviews around the city. I was tempted to try to pretend I hadn’t seen her, but that was impossible when she stepped in front of me and asked whether I might have enough spare change for her to get a cup of tea, please?

It would be nice to claim I was moved by compassion, but it was probably more conviction. Given that I’d spent the past few hours interviewing various people about the problem of homelessness for a magazine article calling others to action, I really had no choice but to stop.

Her story spilled out over that cuppa and a bacon sandwich in a nearby cafe. She’d fallen in love with a younger guy visiting her part of the country, moved to the big city to be with him, and things had been wonderful for a while. But then it all started to go wrong, and before too long they had split up, leaving her with nowhere to go.

Too ashamed to go back to where she was from and be shown up for a fool, she pretty quickly ran through her list of new friends’ sofas. From there it was a bed in a hostel when there was room, and curling up in some discarded cardboard boxes under a bridge when there wasn’t.

After sitting and talking for a while, I tried to leave her with some encouragement along with the small amount of money I had on hand. Noting that we’d met in nearby Sheep Lane, I told her about the story of the shepherd who’d gone looking for one of his flock when it ended up lost and alone. I told her Someone knew she was out there on her own, was missing her, and was on her trail.

I’d learned as a student journalist that news, when you boil it down, is always about individual people. I was reminded of this in that encounter, many years ago, as Marilyn brought homelessness home to me in a way all my hours of interviews had failed to do.

The best journalism always anchors itself in human experience—what that event meant for them, what this proposal might mean for you. Whether it’s politics or medicine or crime or sports, it’s ultimately about flesh and blood, not ideologies or allegiances, concepts or causes. The news may have a headline, but the news always has a name, or names.

Remember that the next time there’s reporting about immigration, gun control, gender, refugees, or global warming. Just as the image on your television screen is made up of lots of little pixels, The Big Picture actually comprises lots of little…people.

As bearer of the greatest news ever, Jesus knew this. He didn’t speak about the issue of world evangelization, He told the story of a lost sheep. Like Marilyn.

4 Responses to “The news has a name”