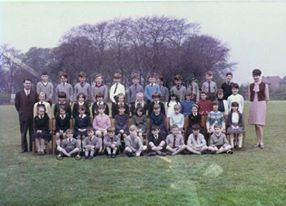 I REMEMBER HIM every time I go to my online bank account. The security prompt asks me for the name of my first childhood friend and I type in his.

Actually, he wasn’t the first: we didn’t meet until we were maybe eight or nine. But he was the first I lost.

Thomas, as I’ll call him—trusting you will acknowledge the foolishness of sharing a financial security password with the world—was in Miss Quilliam’s class with me at Woodheys County Primary School. We bonded over a love of drawing and cowboys, which we combined in marathon paper-and-pencil sessions after school.

Such sedentary activities suited him best. Red-haired, ruddy faced and slightly chubby, a bad case of asthma kept him on the sidelines for even the mildest gym activities. He would wheeze and cough constantly, pulling his inhaler out of his pocket like a gun from a holster.

And then one morning he didn’t turn up for class. Miss Quilliam told us that he’d suffered a really bad attack the previous evening, and the ambulance had not gotten him to the hospital in time.

It would be nice to write about how I was overwhelmed by grief. But the truth is I was more underwhelmed in this first close encounter with death. Bereavement was a distant concept, something that happened in the movies, but not in real life. Not in my real life.

Certainly, recognizing we wouldn’t get to wander the Wild West together in pictures any more made me feel terribly sad. But I remember also feeling glad that Thomas didn’t have any brothers or sisters, so they wouldn’t feel sad like I did.

It didn’t occur to me until many years later that while Thomas’s death had left something of a hole in my world, being an only child it had simply blown up that of his parents.

As I think about Thomas each time I manage my finances now, I also think about his mother and father. I hope that they found some comfort. I hope they were able to piece together a new world for themselves.

I was too stunned—or stunted—to take it all in that day Miss Quilliam told us Thomas had died. But while I couldn’t really get my head around the news, my heart made its own small effort. Though I realized that I’d never get to sit with him again, I knew that I wanted to somehow hold onto him.

So, I took the ruler from his desk and furtively slipped it into my school bag. Maybe we could still draw together, in some fashion.