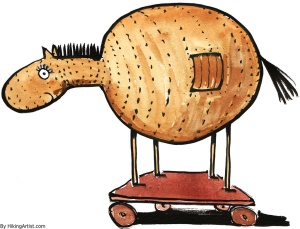 IF THERE IS a war on Christmas, then the church is losing, and not for the reasons that are commonly cited. I don’t believe the church is on its back foot because retailers are promoting “Happy Holidays” instead of “Happy Christmas.”

As far as I can see, the problem isn’t external, it’s internal. In my opinion, it’s not what people are throwing at the church from outside that’s caused so many people to dismiss the message of the Incarnation. It’s what we in the church have allowed in—the old Trojan Horse strategy.

We have mistakenly opened the gates to the world’s ways and values, thus diluting our message. Chiefly, I fear, we have confused three things—each of which come to mind because, sadly, I have first identified them in my own life.

Commodity and community. Many churches aim to meet people’s felt needs, promoting their kids ministry or marriage enrichment programs as “the answer” people are looking for. There’s some wisdom in scratching where people itch, of course; Jesus often healed people physically before addressing their spirits.

But at its core, the church isn’t a selection of tools or fixes. And with the world at everyone’s fingertips through Google, chances are someone can always find a better, flashier option elsewhere. No, the church isn’t a product or a program competing with others, it’s a unique place, or should be. Where a group of broken people is figuring out how to love and live in the light of their having been redeemed. That’s incarnation, not algorithm.

Popularity and singularity. Our culture is so determined to find offense these days that everyone—from politicians to pastors—seems to be walking on egg shells. We desperately try to avoid saying anything that might be misconstrued, misinterpreted, or misrepresented. But when your chief aim is to avoid offending anyone, you end up satisfying no one.

We need to be wise in these under-the-microscope times, for sure. Still, let’s trust the Holy Spirit to give us the words to say when we are called to account (Luke 12:2), rather than relying on carefully constructed media statements. Jesus’ message was inclusive, in that it was for all. But it also required those who responded to forsake everything else—so in that sense it was (and remains) exclusive. The church is supposed to stand out for the right reasons rather than try to fit in for the wrong ones.

Self-fulfillment and self-sacrifice. Too often, I fear, we give the impression that the Christian life is about Jesus coming along behind to help fulfill all our hopes and dreams, rather than about us leaving them to follow Him. Yes, the Christian life is a great adventure, but in an it’s-dangerous-out-there way, not a sanitized, theme park version.

Note that when Jesus sent Ananias to Saul, still blinded from his life-changing encounter on the road to Damascus, it wasn’t to excite the new convert about all the cool things that lay ahead for him. It was for the messenger to “show him how much he must suffer for My name” (Acts 9:16). Only something worth giving your life for could make that appealing.

The “war on Christmas” isn’t really so much about what the world says during the holiday season, but what the church, regrettably, does the rest of the year to make this season seem irrelevant. We’ve dimmed the bright light that draws seekers.

2 Responses to “A Trojan horse Christmas”