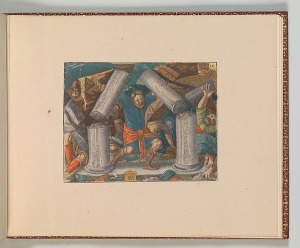 A FORTHCOMING movie release has me revisiting my list of saddest verses in the Bible—headed by Matthew 26:58. This describes how braggadocious Peter, the disciple who had promised to stick with Jesus to the end, “followed at a distance” after His arrest.

What a miserable place to be, caught between love for God and fear of what that might demand of him. If it doesn’t get any worse for a person of faith than that, then Judges 16:20 comes in a very close second: “But he did not know that the Lord had left him.”

The reference is to the Old Testament judge, Samson, whose flawed character and checkered career is the subject of a namesake PureFlix movie out this month.

Having finally revealed the secret of his strength to nagging Delilah after some 50 Shades of Grey shenanigans, Samson rises to face the Philistines. The enemy has come to capture him with his now-shorn head, and our hero doesn’t realize God’s hand has lifted from him.

This seems to be the sad end to a train-wreck of a life that should have turned out differently. Chosen by God to deliver His people from oppression, Samson is unable to keep his passions in check.

The immediate consequence of Samson’s capture is that the Philistines gouge out his eyes. Gruesome and also rather sobering, as they were what had gotten him into so much trouble in the first place.

He had chosen, you may recall, to take a Philistine woman as his wife—even though they were his people’s oppressors, the ones he was to rise up against—because “she was right in (his) eyes” (Judges 14:7).

From there things go downhill, with fits of temper and feats of strength. It all seems to end rather badly, and sadly. But there’s a hint of redemption even in the temple of Dagon, where the Philistines parade blind, shackled Samson for entertainment.

Samson asks God for one more burst of strength, so that he might get his revenge. God grants this request, but it seems to me to involve much more than just a final gesture of defiance from a failed leader. It’s actually less about raising a middle finger than pointing to God.

Positioned between the columns of the temple, Samson “bowed with all his strength” (Judges 16:30). This is a very different posture to previous feats of strength, in which he displayed “hot anger” (14:19) and “arose” (16:3). What might he have achieved if he had exercised more of his strength in humility, subject to God?

And then there’s the result. This wasn’t just Samson getting his own back, actually. It was God giving him an opportunity to serve Him as he always should have.

For in collapsing the temple and killing the 3,000 Philistines there—interestingly, the same number who came into the church at Pentecost—Samson fulfilled a command. It was the one God had given His people through Moses, the Israelites’ first deliverer.

Telling the Israelites what they need to do when they enter the Promised Land, God instructs Moses “you shall not bow down to their gods nor serve them, nor do as they do, but you shall utterly overthrow them and break their pillars in pieces” (Exodus 23:24, emphasis added).

Despite all of Samson’s missteps, God gave him a chance to get it right in the end. It’s the same opportunity He is still giving each one of us.