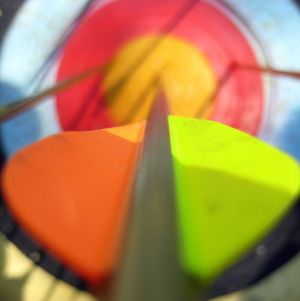 THE SAYING goes that everyone has a book in them. What most people don’t know is that there is a second line to that adage: “And in many cases, it should stay there.”

While the democratizing digital publishing revolution has resulted in some gems in the past few years, it’s also generated an awful lot of junk. Maybe it’s what the ancient wisdom writer had in mind when he observed, “Of making many books there is no end” (Ecclesiastes 12:12).

From having collaborated on a number of books over the past few years, here’s some advice for anyone thinking that maybe the book inside of them should come out.

Legacy, not vanity. Have a reason for writing that’s bigger than yourself. The best Christian books don’t say, “Look at what I did!” They say, “Look at what God did—and let me be a part of it.” The Bible is all about individuals, but each one is telling part of God’s story, not blowing their own trumpet.

Paint a target. Think of your audience like an archery target, with concentric circles. Who’s in the bullseye? Not just “pastors” or “women” or “teens,” but a little more about them, and their backgrounds, interests, and concerns. Is your audience new pastors or middle-aged women, adolescent guys or girls? Focus most of your attention on communicating to the red-spot readers, with lesser concern for those in the outer bands.

Find a thread. Simply telling a series of “and then…” stories about your life isn’t enough. There has to be some common thread—some unifying themes or lessons that weave together. Having several key points in mind to share will help you choose which stories to tell to reinforce the main message.

The writers of the four Gospels followed these guidelines. Each account of Jesus’s life and ministry was written with a different goal in mind. The art of writing a great book is choosing the right words—to include and to omit.

Remember, at the close of his Gospel, John noted (21:25), “Now there are also many other things that Jesus did. Were every one of them to be written, I suppose that the world itself could not contain the books that would be written.”

A wise word for every would-be author.

2 Responses to “A bullseye book”