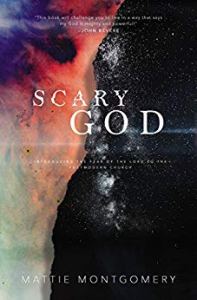 He is not a Big Meanie; nor is He a Big Marshmallow. The Bible is pretty clear that He is both fierce and tender at the same time. He is our judge, but He also longs for us to experience His unconditional love.

It’s a tricky tension to keep balanced. Many of us tend to lean one way more than the other, just as our natural stride (if left unchecked) typically takes us to the right or the left. Our default is often determined by our past experiences—or possibly our counter-reaction to them—and our personality.

For much of my Christian life, I have tended towards the marshmallow side. I have been thankful for God’s grace and mercy, and have needed both on many occasions. But in recent times, I have come to acknowledge and embrace more of God’s fierceness and fearsomeness.

Christians these days often talk about enjoying God’s presence, and that’s certainly appropriate. But consider how many people in the Bible encountered God, or even just His emissaries, and their reaction was not joy but alarm. Even fear.

You’ll often hear preachers explaining away the Bible’s talking of “the fear of the Lord” as really meaning awe and respect. In some cases, that is true, But in some instances the reference doesn’t mean that. It’s actually talking about knee-knocking fear, plain and simple.

I was fortunate to have the opportunity to explore more of all this in working with Mattie Montgomery on his new book, Scary God: Introducing the Fear of the Lord to the Postmodern Church (Thomas Nelson).

He’s the former lead singer of Christian metal band For Today, who made a name for themselves in the genre’s mainstream despite an unapologetically Christian stance. Mattie now leads Awakening Evangelism, which aims to encourage and equip Christians to share their faith more boldly.

In the book, he tells how even though he was already “sold out” to God, he came to a fuller understanding of who He is—which includes His wrath toward anything and everything that mars the beauty He intended for all of creation.

Acknowledging that God is to be feared (as well as loved) doesn’t have to make us mean and angry. Recognizing this other part of Him should only make us even more grateful for His love and mercy.

Remember in Luke 7, when Jesus told the story of two people being forgiven their debts, one of 50 denarii and the other 500 denarii? He asked the Pharisee which one loved their kindly moneylender more.

The fallen woman who washed His feet with ointment “loved much” because her many signs were forgiven, Jesus went on, while “he who is forgiven little, loves little.”

Appropriate fear doesn’t drive us farther away; it draws us closer to the Father in wonder and thanksgiving.