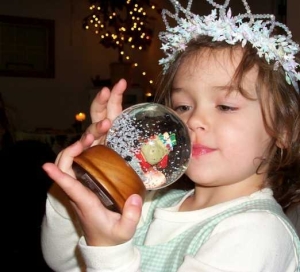 MUSICIAN ROY Wood is probably rubbing his hands as the royalties come in for his perennial Christmas hit, I Wish It Could be Christmas Everyday. The 1973 Wizzard favorite is a holiday radio (and online listening) staple, but his songwriting credit should really be shared with the apostle Peter.

After all, Wood’s let’s-bottle-this-thing sentiment is just an echo of the one Peter voiced on top of Mount Hermon, after Christ’s transfiguration. Caught up in the wonder of experiencing the Messiah in a new way, he said, “Let’s just camp here” (Butcher paraphrase).

I get it. Some moments are so precious you just want them to go on forever. But the reality is that, if they did, they wouldn’t be special anymore. What was once transcendent would instead become trite. If we are not careful, familiarity breeds contempt.

As a bit of a sentimentalist, I get misty-eyed as I remember past Christmases. A corny old TV ad is all it takes to get me all snifffly. So especially at this time of year, I have to guard against the hankering to hang onto things.

I try to remind myself that Christmas is a snow globe moment. It’s delightful, but it’s only for a short time. What floats around creating the unique atmosphere is going to settle, leaving you with a more ordinary, everyday scene.

Remember, Peter didn’t get to stay on top of the mountain. Jesus took him and the other disciples back down into the valley—where the first thing they encountered was the work of the enemy, in the shape of the boy tormented by a demon.

At the first Christmas, the shepherds went back to the fields. The magi returned to their homeland. Joseph and Mary, meanwhile, had to go on the run as they encountered the work of the enemy. It came in the shape of Herod’s slaughter of any young boy he could find, in an effort to snuff out the new king he had heard about.

Jesus was revealed in profound ways at His birth and at the transfiguration. But each event was less a moment to hold onto than a movement to join. They were a breaking into the world—not an end, but a beginning.

There was an echo of this after the resurrection, in which Jesus again was seen in a new way. Because this still wasn’t the end; there was the ascension to come. That is why when Mary was overjoyed to see her risen Lord, He had to chide her gently, “Do not cling to me . . . ” (John 20:17).

Have a very Merry Christmas—and then let it go.

Photo by Noël Zia Lee on Foter.com/CC BY