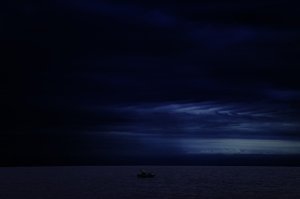 ST. JOHN OF the Cross may have named the sense of spiritual abandonment many believers face at some stage in their life as “the dark night of the soul.” But he probably borrowed the idea from the disciples; they knew all about a dark night with so sign of God.

After Jesus had fed the 5,000, He went up on the mountainside to be alone for a while, and the 12 got into a boat and headed for Capernaum. The sea was rough, and they were having to pull hard at the oars.

They might have been forgiven for thinking, Here we go again. They had found themselves in peril at sea once before, when Jesus was with them but snoozing in the back of the boat. That had been frightening enough, but at least He was there.

This time it was even worse, perhaps. For, as John 6:17 records, “It was now dark, and Jesus had not yet come to them.” Darkness and no Jesus. Scary.

Maybe you have been there. Or maybe it’s where you are right now. You have been following Jesus and thrilled at some of the things you have seen Him do. You’ve even gotten to be a part of them.

But now that sense of safety and certainty is gone. The lights have gone out and there is no sign of Jesus. You’re on your own, pulling at the oars on a choppy sea, and wondering: “What’s up?”

I can’t tell you why He has seemingly left you alone, but maybe I can offer a little encouragement as you wait.

Did the disciples remind each other that they’d been in a similar situation previously and everything had worked out? Similarly, rehearsing God’s goodness and care in the past may raise your spirits and stir your faith.

Whatever the disciples’ response, Jesus was already on the way. Be encouraged: just because you do not see Him yet, that does not mean He isn’t there. Be expectant. And be open to Him coming in a way that may surprise you; the disciples were spooked when they first saw Him (John 6:19).

Finally, don’t assume that darkness must mean delay. Don’t think that just because God seems to have been silent and absent for a time, that must mean you’re going to be slower in reaching all that you have been hoping and working toward.

When Jesus got into the boat with His disciples, “immediately the boat was at the land to which they were going” (John 6:21). The One who turned water into instantly fine wine, circumventing the maturation process, can make up for any apparently lost time.