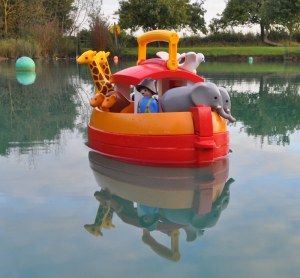 IF BEING CONFINED to your home for a few weeks with a loved one or two—and maybe a couple of pets—seems challenging, think about Noah. He spent the best part of a year closed in not only with all his family, but an entire zoo.

As a survivor of that ordeal, Noah may offer a lesson or two for all of us wondering how best to do this self-isolating and social distancing thing in this time of the coronavirus. From his example, in the account of the ark told in Genesis 6-9, I see four things we might seek to emulate in the days ahead:

He didn’t question. Okay, when God tells you to build a giant boat because a storm’s coming but there has never been any rain, according to some interpretations of the text, you have a pretty good idea Who’s in charge. But while it’s only honest to give yourself space to wonder what God’s up to right now, we should be careful not to let doubt about His goodness creep in.

He didn’t struggle. The ark was a shelter, not an escape. It didn’t have a rudder, so Noah couldn’t steer it anyway. He didn’t try to row or rig up a sail. He just had to sit tight and bob along—meanwhile keeping pretty busy with everything at hand, like keeping everyone fed. We may not be in control of our circumstances, but we can still do many things God has told us to in the meantime—like being kind to one another, and caring for our neighbors.

He shoveled . . . stuff. Get a group of living things together in a confined space and some smelly, unpleasant stuff is going to come out. That’s just a fact of fallen life. Don’t ignore it; clean up your messes so everyone can breathe easy again. Keep short accounts.

He looked up. Noah raised his eyes to the skies when he let the dove out to see if land had emerged again. Let’s not get so focused on all the problems and unknowns on the ground in front of us that we forget God is bigger and higher than all of that. As Psalm 121:1-2 says, “I lift up my eyes to the hills. From where does my help come? My help comes from the Lord, who made heaven and earth.”

It’s worth noting that while Noah may not have been in charge of the ark’s direction, God was. If it had been floating on the deepest part of the sea when the storm ended, Noah would have had to wait much longer to be able to step out onto dry land when the water finally drained away. But God had it settle on the top of a mountain. In other words, He limited the duration of the testing.

We may not have Noah’s carpentry or veterinary skills, but they weren’t his main asset. What gave him the ability to respond so faithfully to his crisis was that, according to Genesis 6:9, he was “a righteous man, blameless in his generation . . . [who] walked with God.” We can do the same in the days of the coronavirus.