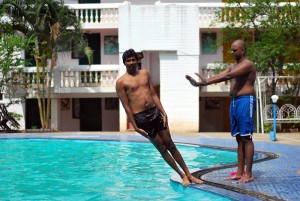 ONE OF THE mantras of Christian leadership teaching is the importance of being led (by the Spirit) and not driven (by our own desires). But as with many aphorisms, there’s an exception that proves the rule. Namely, when you are driven by the Spirit.

At first blush this sounds contradictory. While we know that the Holy Spirit is the source of supernatural power, we tend to associate this person of the Trinity with warm fuzzies. After all, He’s the Spirit of peace and joy and all that, right?

And didn’t He descend in the form of a gentle dove when Jesus was baptized by John in the Jordan? Well, yes, but look at what happened next. No sooner had a voice from heaven declared that Jesus was God’s beloved Son than “the Spirit immediately drove him out into the wilderness” (Mark 1:12).

Not a particularly gentle, lamb-like move. Indeed, the Greek word for drove, ekballei, means to be thrown or cast out, to be banished. The same root is used in describing Jesus’s later actions in casting out demons and clearing the temple of the money-changers. It contains a degree of righteous violence.

Under the Spirit’s prompting, Jesus went into the wilderness to be tempted by the devil for forty days. After coming come through that experience and triumphing in His encounter with Satan, He was prepared for all that lay ahead.

The lesson seems to be that God may lead us into situations and circumstances we might not choose for ourselves because He is readying us for something else. And that requires recognizing sometimes the Holy Spirit doesn’t just invite us to join Him. Rather, He insists on our involvement.

Paul appears to have understood this. When he set out for Jerusalem, he told his concerned friends that he was going there “constrained by the Spirit” (Acts 20:22), using a Greek word similar to the one describing Jesus’s being pushed into the desert.

Paul said that he was going there “not knowing what will happen to me there, except that the Holy Spirit testifies to me in every city that imprisonment and afflictions await me” (Acts 20:22-23). Again, not a cozy exchange by any means.

But sometimes we’re called to do things we might not choose for ourselves. It necessitates an openness to letting the Comforter (John 14:26, KJV) become our Discomforter. That’s when pull comes to shove.