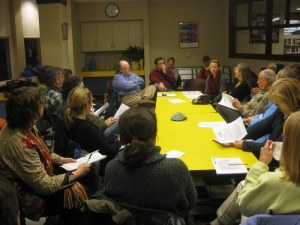 ONE OF THE best things about being a full-time freelancer is not spending so many wasted hours in useless corporate meetings. When I first swapped a secure salary for the unpredictable self-employed life, I couldn’t get over how much more time I had to actually get on with being productive.

I suspect this is something that many people have also learned through the stay-at-home weeks of the pandemic. It’s going to be interesting to see how business practices change as things start to return to normal. Even if other companies don’t go as far as Twitter, which has just announced that employees can continue to work remotely instead of returning to the office—ever—regularly scheduled workplace gatherings may be trimmed back.

For those meetings that do go on, three simple steps I’d suggest from many years of sitting in middle management and leadership gatherings: 1) Require attendees to actually read all those supporting documents ahead of time (maybe include an Easter egg prize to ensure they do). 2) Have someone keep the meeting on track: tangents get dropped down to the any other business portion. 3) Close by clarifying what was decided and who’s doing what.

I’m not advocating we completely abandon in-person exchanges for the likes of Zoom and texting. Call me a Luddite, but I believe there’s a certain synergy that can happen when you are physically in the same space as other people. Things that don’t always seem to occur at a distance; something to do with the mystery of presence.

We are grateful for Zoom and FaceTime keeping us connected with others, not just in our work lives but personally, too. Still, the technology has limitations (this prescient satirical gem from a few years back has been circulating again recently). Mental health and communication experts have also warned of the dangers of “Zoom fatigue.”

Part of that is to do with what I call the secondary agenda of meetings—not the whats or the whys but the hows. Meetings (at their best) identify, discuss, and solve challenges. But they can, or should, also model how those decisions should be implemented.

The tone, language, and manner of those leading meetings are much easier to read when you’re sitting in the same room, not sharing a screen. Unfortunately, that’s not always a positive thing. I’ve sat in more than a few “Christian business”—and church—meetings where people have been berated and belittled for some failure.

Yes, there is a place for excellence and straight talking, but I still don’t understand how some leaders seem to think it’s okay to act like a jerk behind closed doors in the pursuit of being all Jesusy in public. In that regard, online meetings may serve as a damper, because the culprit might be concerned that their temper tantrum could be seen by others.

If our extended COVID-19 timeout changes things in this way, that’ll be at least one positive. I’d almost want to be in the meeting to witness it. Almost.