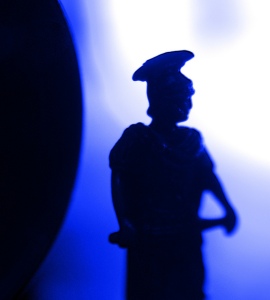 THE FIRST RULE of volunteering, I have learned, is to read the small print on the sign-up sheet. Otherwise you end up with stuff to do that is above your pay grade. Beyond your skill set. Or—and maybe worst of all—way out of your comfort zone. Which is how I ended up dressed as a Roman soldier this week.

My buddy, John, and I had offered to help with one of the Easter events at our church. We figured that we’d end up maybe moving some furniture, handing out leaflets, or helping finish off any uneaten cookies at the end. No such luck. Two days before the gig, we were handed scripts and told we were helping to bring Holy Week to life.

At least that didn’t give me too much time to panic. If there’s one thing that makes my stomach turn and my toes curl, it’s the idea of having to act. I don’t mind public speaking (too much) and a game of charades is bearable. But getting up in front of an audience and pretending to be someone else? I mean, I have enough trouble trying to be a convincing me, let alone another person.

This aversion to acting touches on something deep somewhere in my past. It’s to do with the fear of being held up to ridicule, or mocked and shamed. In fact, the issue came up in conversation with close friends the day before I learned about my role. Perhaps I should have realized that maybe God was up to something.

Fortunately, our audience at the Road to Resurrection experience turned out to be small in number and stature: a handful of young kids. Not that they were entirely appreciative of my Roman legionnaire and John’s Barabbas. During one exchange we asked them about justice and fairness—striving for that teachable moment. One of them suggested that Jesus should be set free and we should both go to the cross instead. Tough crowd.

Having somehow survived the evening, it occurred to me that—had I been given the option–although I would not have chosen my role, it afforded me something of a fresh view on Easter. My Roman legionnaire had to tell the visitors how he and his fellow soldiers had punished and humiliated Jesus. He was ridiculed, mocked, shamed: exactly what I feared.

Now I am not going to begin to suggest that dressing up and fumbling my way through a few lines (with a cheat sheet hidden in my shield-carrying hand) comes anywhere close to entering into the sufferings of Christ, as we are invited to experience (1 Peter 4:13 and 2 Corinthians 1:5). But I maybe got to peek through the window for a few minutes, at least.

Having some of my brokenness exposed as a faint echo of what Jesus experienced on such a greater scale made me marvel again at His remarkable love.

Maybe, like me, there’s a bruised place in you that connects with some of what Jesus experienced during Passion Week, if you will let it. The sting of betrayal by someone who has been close. The heartbreak and rejection of an unfaithful kiss. The loneliness of abandonment by those you were trusting. The injustice of false accusations.

If so, let me invite you to bring it to Jesus. He will carry it to the cross, where there is healing and hope. We don’t have to be forever hobbled by hurts. The beauty of the Easter story is that at Calvary, Jesus made everything right. It’s in the small print of John 19:30: “It is finished.”