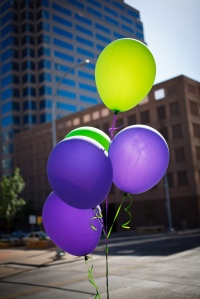 WHEN MY KIDS were small I knew of a fellow dad who gave his little ones balloons to hold each week when they went to church because he wanted them to have a sense of anticipation. You know, like they were going to a party.

I’m usually glad to be in church on Sunday mornings, but I have to admit that I don’t always have such high expectations. I don’t mean that I am disappointed or that I just go through the motions. Indeed, I make an effort to engage actively, from worship to focusing on the message, rather than what I’d like to order for lunch.

I’m just typically not anticipating that this could be the day I am disrupted. In this I know I am not alone, able to point to at least one other person with a similar disposition.

Zechariah was certainly no spiritual slacker. A priest of many years, together with his wife, Elizabeth, Luke 1 says he was “righteous before God, walking blamelessly in all the commandments and statutes of the Lord.”

Given that recognition of his character, it’s pretty safe to assume that when he found that he had drawn the responsibility of entering the temple and burning incense, he didn’t take that lightly. He had been chosen to be part of an expression of devotion passed down through the centuries.

That was quite an honor, one underscored by the presence of “the whole multitude of the people . . . praying outside at the hour of incense” (Luke 1:10). Talk about peer pressure! All in all, it’s likely that Zechariah entered the temple with considerable reverence and respect.

He would also have had a good idea of what was supposed to happen next, of course, following the long-held traditions of all who had gone before him.

And then God interrupted, with what may be one of the biggest surprise parties ever staged. The angel Gabriel appeared to tell Zechariah that he would soon hold the son he’d yearned for for so long. And not just that, but this boy would point the way to the Messiah. The prayers he had offered without apparent result were going to be answered.

What began as an engagement became an encounter, one that literally left him speechless. I’m left wondering how I would feel if one Sunday my dutiful attendance were to unfold in a similarly unexpected way?