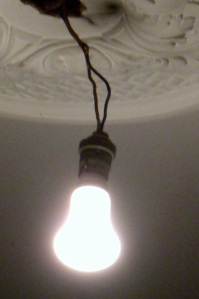 IT’S NOT THE most elegant of images, but sometimes I think of Christianity as like waking up in a poorly lit coal cellar. Sitting with your back to the wall, things seem pretty good. But as you get up and move closer to the lightbulb hanging in the center of the room, you begin to see that you are grubbier than you first realized.

This seems contradictory. As you become more like Jesus, you (hopefully) also become increasingly aware how unlike Him you are. But this is not a cause for a woe-is-me kind of despair. Actually, it’s a reason for even greater rejoicing. That initial flood of delight in salvation, when you first know that you are forgiven and free, only gets richer and deeper as you start to appreciate just how much more you have needed God than you first thought.

That process requires some reflection. So while we have our eyes set on the future God has for us, sometimes we need to cast a glance backwards to remember where we have come from. And sometimes God helps in the process, bringing us back to regrets and remorse we may still be lugging around.

Take Peter. The brashest of the disciples had crumpled the night Jesus was arrested, denying that he even knew the Savior. Even having been delighted by Jesus’s resurrection, he must have still carried some shame over the betrayal.

Then comes that breakfast on the beach. Following Jesus’s initial appearance to them, several of the disciples have gone back to their day jobs. Then, He appears to them at the shore. They haven’t caught anything, but at His suggestion they cast their net on the other side of the boat. Lo and behold, they haul in a bumper catch—an echo of the incident that had preceded Jesus’s calling to follow Him. At that time, Peter had told Jesus he was “a sinful man, O Lord” (Luke 5:8).

In this second miraculous fish encounter, Jesus takes Peter aside and takes him back to the night of the betrayal. He asks him three times about his love—once for each moment of betrayal. A chance to wipe the slate completely clean.

But notice how Jesus addresses him. Not as Peter, the name He had given him (Matt. 16:18) that was his new identity (which some see as the “rock” on which Jesus said He would build His church). No, he calls him Simon, his old name. Surely this is no accident. Jesus isn’t just brushing Peter’s failure away as of no consequence. He wants him to face it squarely. Only then can Peter truly be liberated and forgiven.

Some Christians argue that because we become new creations when we are born again, the past is all dusted and done, not to ever be revisited. And yes, Jesus did say, “It is finished” on the cross (John 19:30). But while we don’t need to go grubbing around in our history unnecessarily, there may be times when Jesus will call us back to who we were, fallen and failed, so that we can know deeper forgiveness and freedom. Only then can He call us up into who He intends for us to be.